Another Step Toward Equal Pay 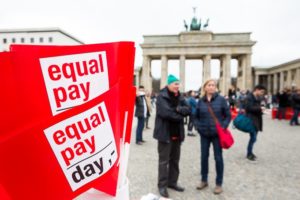 On April 9, 2018, in Rizo v. Yovino, the Ninth Circuit Court of Appeals held that under the federal Equal Pay Act an employer cannot justify a wage differential between male and female employees by relying on prior salary. The EPA prohibits sex-based wage discrimination between men and women, in the same establishment, who perform jobs that require substantially equal skill, effort, and responsibility under similar working conditions. According to the court’s opinion, “[w]e now hold that prior salary alone or in combination with other factors cannot justify a wage differential. To hold otherwise – to allow employers to capitalize on the persistence of the wage gap and perpetuate that gap [endlessly] – would be contrary to the text and history of the EPA and would vitiate the very purpose for which the act stands.”

What Happened in Rizo

In this case, after Rizo was hired she learned that male colleagues in the same job were being hired at a higher salary than her. However, the only rationale the employer offered for this wage disparity was that Rizo’s salary was lower at a prior job. The court held, “[that] this scenario provides a textbook violation of the “equal pay for equal work” mantra of the EPA . . . because [p]rior salary level created the only differential between Rizo and her male colleagues. Thus, requiring that the “any-other-factor-other-than-sex” defense must be limited to legitimate, job-related factors.” Through this decision, the Ninth Circuit (covering employers in Alaska, Arizona, California, Hawaii, Idaho, Montana, Nevada, Oregon, and Washington) joins the Second, Sixth, Tenth, and Eleventh Circuits that have likewise interpreted the “any-factor-other-than-sex” defense is limited in its application.

The impact of the Rizo decision reinforces federal and state equal pay rights and highlights National Equal Pay Day because the decision was filed April 9, 2018, the day before 2018’s Equal Pay Day. Equal Pay Day was originated by the National Committee on Pay Equity (NCPE) as a public awareness event illustrating the gap between men’s and women’s wages and is commemorated around the nation and the world. When created, the NCPE decided to select a Tuesday in April as Equal Pay Day. A Tuesday was selected to represent how far into the next work week women must work to earn what men earned the previous week. As the fight for equal pay continues, Rizo may be reviewed by the Supreme Court, although there are no current indications the employer is pursuing review. So, what now? Employers should take steps to review their policies and eliminate any hiring policy that relies on a job applicant’s prior salary in determining their starting pay. Additionally, employers should review applicable state laws related to hiring practices and prior salaries to ensure compliance and avoid liability. However, according to the NCPE, because on average women earn less than men, they must work significantly longer for the same amount of pay. So . . . maybe the better answer to “What now?” is that employers do not just review their policies, but take the steps necessary to ensure that their employees are paid equally, regardless of gender, and work toward ending the perpetual cycle of pay inequality. View in Webpage